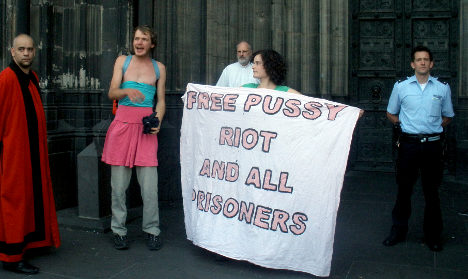 “A 20-year-old woman and two men aged 23 and 25 shouted slogans wildly and held up a banner,” a police spokesman said on Sunday.

Their banner read “Free Pussy Riot and all prisoners” in English, and the trio was dressed in the colourful clothes and balaclavas worn by the Russian punk band, who were jailed for two years last week for staging a protest against President Vladimir Putin in a Moscow cathedral in February.

The Cologne protesters were bustled out by cathedral officials, and have been charged with breaching the peace and disturbing a religious service.

Police said they did not resist being removed from the cathedral.