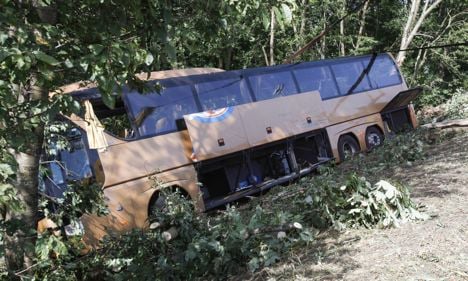 The coach was travelling back from a school trip to Paris when it slid off the motorway and overturned into a ditch early on Sunday morning.

Media reports said the victim was a member of staff who had been accompanying the students on the trip. He was rushed to hospital, but died of his injuries. Around 20 passengers are currently being treated for mild wounds.

Belgium’s Belga news agency said early indications suggest the driver fell asleep as he was passing through the Belgian municipality of Cerexhe-Heuseux, near the German border, en route to Munich.

A rescue helicopter was sent to the scene and Belgian television broadcaster RTL showed pictures of several ambulances attending to passengers. The worst affected were those who had been sitting at the front of the bus, Die Welt reported.

Given the nature of the accident, the injuries could have been much worse, one local official from the nearby town of Soumange told broadcaster RTBF.

“We have avoided a major catastrophe,” he said.