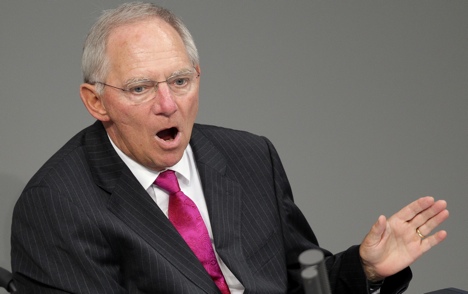 Hours later his warning was reiterated by the parliamentary head of Chancellor Angela Merkel’s CDU party. “The Greeks have to stick to what they have promised,” Volker Kauder said on Sunday.

“There is no room for manoeuvre, either in terms of time or substance,” he told Der Spiegel. “That would be yet another agreement broken. That’s exactly what led us to this crisis.”

Their comments come ahead of talks in Berlin this week between the German chancellor and Greek Prime Minister Antonis Samaras.

The Financial Times reported Wednesday that Samaras planned to discuss extending a deadline for Greece to make harsh budget cuts. They are a precondition demanded by Greece’s international creditors in order for it to receive its next slice of financial aid.

The newspaper said he would ask for two more years to make the cuts in a plea that will just fall short of being a formal request.

Auditors from the European Commission, European Central Bank and

International Monetary Fund, known as the Troika, are to release a report next month on Greece’s progress in achieving the required austerity.

According to the magazine, this report will call for Athens to slash €14 billion from its budget over the next two years. That is €2.5 billion more than originally demanded.

Der Spiegel added the extra cuts were needed because planned privatizations were not turning out to be as lucrative as hoped and tax revenues were falling short of forecasts.

Greece faces bankruptcy as it endures its fifth year of recession.