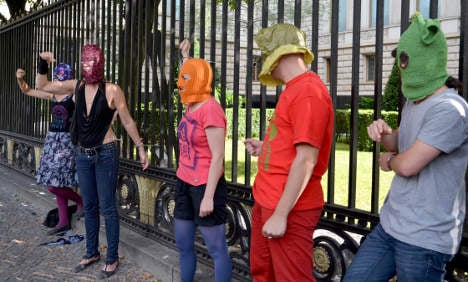 The German government, the EU and the USA all condemned the verdict.

Maria Alyokhina, 24, Nadezhda Tolokonnikova, 22 and Yekaterina Samutsevich, 29, were sentenced on Friday to two years in prison for “hooliganism motivated by religious hate.”

The demonstrators, including rally co-organiser Sergey Medvedev, stayed at the embassy for much of the afternoon, awaiting the full verdict, which was read out by Russian judge Marina Syrowa over a period of two and a half hours.

“We’ve already managed to achieve something with these protests from politicians, artists and supporters all over the world,” Medvedev told The Local. He was referring to the decision of the Russian prosecutors to back down from their initial calls for the women to be jailed for seven years.

The trio have been held in prison since March after being arrested for carrying out an anti-Putin protest stunt in a Moscow cathedral, singing a punk song calling for the Virgin Mary to save Russia from him.

“In my eyes, the harsh sentence has no relation to the music group’s protest action,” German Foreign Minister Guido Westerwelle told Saturday’s edition of the Tagesspiegel.

He said he was “concerned about the effects of the sentence against the three musicians for the development and freedom of Russian civil society as a whole.”

Berlin’s 200 brightly-clad, balaclava-wearing protesters were joined at the Russian embassy by government human rights ombudsman Markus Löning and head of the Green parliamentary party Renate Künast along with several members of the Left party – all of whom had damning words for the Russian justice system.

Löning described the sentence as “devastating,” saying it “underlines the horrific current state of Russian justice,” whereas Künast said it showed that Russia was “no democratic country.”

“It’s absurd that people should be arrested for art.” Inaz, a protestor in Berlin told The Local on Friday afternoon. “Pussy Riot’s whole artistic action has obviously really shaken Putin.”

Once the sentence of two years had been announced, several demonstrators were forcibly removed by police after chaining themselves to the embassy gates, while others danced, sang and even stripped off in protest.

“Russia is a very undemocratic country,” Berlin protestor Martha G. told The Local. “If we were there now, we’d all be arrested just for protesting outside an embassy.”

“I lived in the GDR, so this has horrible associations for me,” she added. “Back then people were arrested for no reason too.”