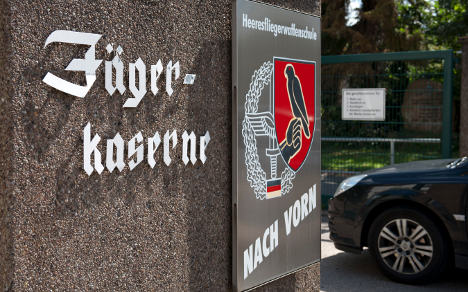 A civilian member of staff at the Bückeburg barracks was held briefly on Friday, but quickly released. “He has been ruled out as the culprit,” said André Lüth, spokesman for the public prosecutor.

The woman soldier was raped last Saturday, according to media reports. She was left bound and gagged and in a locker by a man she said she did not recognise.

Around 100 soldiers are stationed at the pilot training school barracks, along with between 200 and 300 trainees. It should be difficult for outsiders to get in without permission.

“It is secure, as a barracks should be secure,” said Lüth.

This has led to speculation that one of the woman’s colleagues may have raped her. Lüth said the investigation was looking in all directions and that the military police was helping.

A large operation was conducted at the barracks on Friday, with voluntary involvement of soldiers and trainees, he said, but refused to confirm whether this was a DNA swab test.

Women have been recruited into all areas of the German military since 2001 and now make up around ten percent of the personnel.

A spokesman for the military commissioner said on Thursday that rape of women soldiers were very rare.

Yet a study published in 2008 by the army’s sociology institute reported that five percent of female soldiers said they had been sexually attacked – or that someone had tried to sexually attack them.

“There are cases of sexual molestation in the army,” said Ernst-Christoph Meier, director of the institute. But he added that the rate was lesser than generally seen in other fighting forces or in commercial companies.

“I know that the army is consistent in taking action against reported incidents and that prevention is considered very important,” he said.