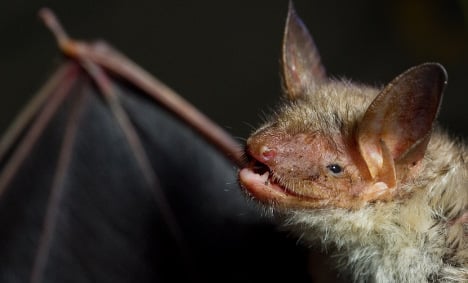 Fire fighters were called out to central Berlin last Saturday evening to deal with an animal in distress, but on arrival found that the man had been bitten as he attempted to feed an injured bat.

Despite being repeatedly urged to go to hospital, the man left without seeking medical attention and before the fire brigade was able to take his details.

The local district authority tested the bat, and results released on Wednesday showed it was carrying the rabies virus.

“The virus is not the classic rabies virus, but the strain commonly found in bats,” Dr. Ulrich Lindemann, official veterinarian at the Berlin Mitte district authority told The Local on Friday.

“This kind of rabies is seldom transmitted to humans,” said Lindemann – the last known case being to a female victim ten years ago in Scotland.

“But it’s still dangerous,” he stressed.

The rabies virus incubation period, before the first symptoms appear, is typically between two and eight weeks.

Treatment with a vaccine after exposure can be highly successful in preventing the onset of disease but only if given within 10 days of infection.

Police are appealing to the man, described as slim, around 40 years old, with thin blonde hair, to seek immediate medical attention.

“We know what the man looks like and every police car on the streets of Berlin is keeping an eye out for him,” Lindemann told The Local.