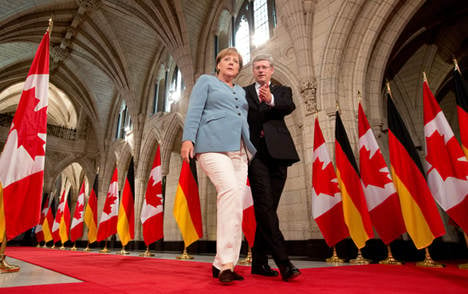 “Once I go back to Germany, I will see to it that these negotiations come to a speedy conclusion because… Canada and Germany are convinced free trade is one of the best engines of growth that we can have,” Merkel said in Ottawa.

Canada and Germany hope to bolster bilateral trade directly and through the Canada-European Comprehensive Economic and Trade Agreement scheduled to be finalized by year’s end, setting “a high standard for agreements between major economies going forward, but to also provide a signal to the global economy that major developed countries are able to move forward on the trade agenda,” Harper said.

A deal with the 27-nation European Union would be Canada’s second-largest free trade pact after the 1994 North American Free Trade Agreement with the United States and Mexico, and the first to include access to municipal procurements.

But there are stumbling blocks in the talks involving intellectual property, public procurement and aspects of the services sector.

Canada’s provinces and municipalities have expressed concerns about losing their ability to extend preferences to local suppliers. Environmentalists, farmers, auto workers and others have also rallied against the deal.

Germany is currently Canada’s eighth-largest export market and ranks fifth among Canada’s suppliers. Bilateral trade has grown significantly over the past decade with imports from Germany rising to Can$12.8 billion in 2011 and Canadian exports reaching Can$4.0 billion last year, according to Canadian trade figures.

A trade accord with the EU, the largest integrated economy in the world with more than 500 million consumers, would boost bilateral trade by as much as 20 percent, according a joint Canada-EU study.

Harper sought Merkel’s key support as leader of Europe’s largest economy for the deal in exchange for backing Germany’s calls for a broader EU political union alongside the current fiscal compact to address Europe’s woes, as well as access to Canada’s rich and much-coveted commodities.

But “we know in a common currency area there has to be more responsibility shared politically,” she added.

Harper, meanwhile, added his support for “not just finding any solution, but finding good and sustainable solutions to these problems.”

“I have great confidence in the chancellor’s leadership,” Harper said while holding firm on Canada not contributing to a eurozone bailout fund.

While Germany has helped backstop struggling eurozone nations, Canada and the United States are the only G8 members not contributing to a bailout stash through the International Monetary Fund to help struggling Greece, Italy and Spain.

Before Merkel wrapped up her two-day visit, she and Harper also lunched with military and mining company executives. Merkel announced that Canada and Germany would partner to extract Canadian raw materials.

“The supply of commodities has become a strategically important issue for many, many governments in the world,” she commented. “And this is why we are so happy to have this close cooperation with a country that is so rich in natural resources as Canada is.”

On her way home, Merkel is expected to stop in Halifax to discuss oceanography with scientists at Dalhousie University’s Marine Research Institute and launch new research on the impacts of climate change on the Arctic Ocean.