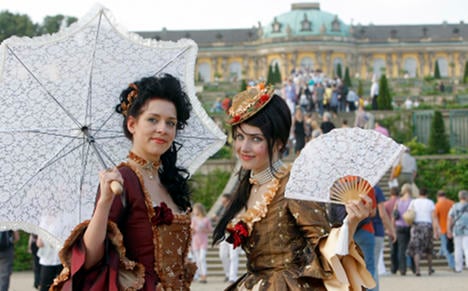 The Avishai Cohen Trio kicks off Jewish Culture Days in Berlin this week. Applaud the Israeli jazz bassist at the Rykestrasse Synagogue Thursday, then hit up all the festivities at Jewish centers and synagogues around the city. On Sunday, the Fasanenstrasse street festival will bring the spirit of Tel Aviv’s largest market to Berlin as artists, vendors, musicians, and dancers provide a bustling atmosphere.

To accompany his exhibition at NGBK, the Berlinische Gallerie, and the Alte Nationalgalerie, the Chilean artist Alfredo Jaar has selected a series of films that relate to his “aesthetic of resistance.” The Bang Bang Club (2010) follows a group of photographers as they document the final days of apartheid in South Africa, while Il Conformista (1970) is Bernardo Bertolucci’s drama about an Italian fascist’s plan to assassinate his old teacher. Both screen either in English or with English subtitles this week.

They breath fire, they walk on stilts, they juggle better than anyone you know. Street circus performers from around the world gather in Bremen this week to fete their craft. The four-day festival features a diverse program of music, miming, magic, and more at venues around the city. Marvel at a most spectacular troupe of acrobats and clowns.

Gute Aussichten is Germany’s most prestigious competition for young photographers. This year’s selections have been traveling around the world from Berlin to Washington D.C., Innsbruck, and Hamburg. Starting Saturday, they’ll be hanging at Cologne’s Museum of Applied Arts. See how architecture fits into its natural surroundings in Nicolas Wollnik’s “Constructures,” and how different television studios around the world set up their spaces in Shigeru Takato’s series before they continue on to the Frankfurt Book Fair in October. The artists will be in attendance at Friday night’s opening.

This weekend, the beautiful city of Dresden is throwing a big party. From jazz bands to rock groups, classical trios, and live DJs, dozens of musical acts set up on open air stages around the city. Rock out all day then check out the 3D light show at the Zwinger Saturday night.

It’s always nice when local shops and restaurants band together to celebrate their community. This Thursday, Frankfurt’s Bahnhofsviertel neighborhood is doing just that. Roam the streets, grab a bite, and pop into a shop or two. You’ll find live music and a variety of special events at thirty spots around the district.

A new wine queen parades through the streets of Heimersheim amidst a swirl of mediaeval knights, jugglers, and musicians this weekend in honour of the town’s 17th Historical Wine Festival. Head to the Ahr Valley, one of the northernmost wine growing regions in the world and taste the late summer bounty in a magical setting right out of the Middle Ages.

The London Olympics may be over but that doesn’t mean you can’t keep the torch aflame. In your heart anyway. An exhibition at the Munich Volkshochschule celebrates the 40th anniversary of the 1972 Olympic Games, which were held in Munich. Go and see the posters and prints designed by German graphic designer Otl Aicher, plus photographs from that beloved event.

Got a gaggle of kids who need to burn of some end of the summer steam? Bring them to the Olympic Park this week. The LILALU Summer Festival features live theatre, cinema, circus workshops, and fun things to jump on like bouncy castles and trampolines. And there’s a beer garden with live music every weekend. Bonus!

Times: Monday – Saturday, from 2pm; Sunday, from Noon; through September 2

Potsdam is enchanting all year round, but especially so on Potsdam Palace Night. The gardens and palaces of Sanssouci Park become a baroque paradise Saturday night as actors in period costumes promenade around the romantically lit grounds. Follow their lead and revel in the atmosphere as baroque ensembles fill the air with music. The night magic culminates in a grand fireworks display. Dear Old Fritz would most certainly approve.

Ballroom dancing! Get swept up in the drama of it this week in Stuttgart. The best of the best compete for the prize as they tango, waltz, and boogie woogie around the Liederhalle Culture and Congress Center. That precision! That flare! Gape at the dazzle of it all.