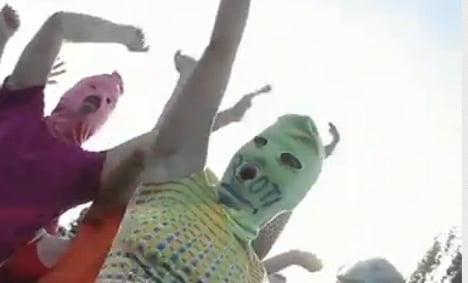 Peaches invited supporters via Facebook to don Pussy Riot-style bright, solid colours and balaclavas, meet in the Prenzlauer Berg area of the city and get stuck into filming the video for her “Free Pussy Riot” track.

Around 400 people turned up and can be seen in the video which was released on Tuesday night as part of the “Free Pussy Riot” petition which has so far garnered nearly 95,000 signatures on the online petition platform change.org.

Supporters who could not be there in person sent in pre-recorded contributions urging for the three young women, two of whom are mothers to young children, to be freed. Snippets of a few famous faces such as German electro stars Deichkind, Kate Nash and Jake Shears from the Scissor Sisters are featured in the video.

Canada-born Peaches, aka Merrill Nisker, is just one of a plethora of celebrities protesting the imprisonment of three members of Pussy Riot – a group of feminists in Russia who staged an impromptu performance of their anti-Putin “punk prayer” in a Moscow cathedral in February.

Russian police arrested Maria Alyokhina, 24, Nadezhda Tolokonnikova, 22 and Yekaterina Samutsevich, 29, in March and they are now on trial for hooliganism motivated by religious hatred or hostility. A verdict is expected later this week.

Their arrest has sparked global media outrage in political as well as artistic and musical circles. An initial fear was that they could face up to seven years in prison, but after Russian President Vladimir Putin said he expected a relatively mild sentence, the prosecutors started talking of three years in prison for the trio.

Peaches said the prosecution was “nothing more than a political stunt by the Russian authorities and Russian Orthodox Church to retain control over the Russian people and instil fear into the free-thinkers, political activists, and artists of Russia.”

“If Russia wishes to be a part of the modern globalised world it must adhere to the standards and principles of a free nation where its people have the right to have a free and open dialogue about all subjects,”

Armin Siebert, head of the Berlin record label Eastblok Music, said the prosecution of Pussy Riot had inspired other rebellious musicians in Russia. “The people are not scared of expressing their opinions,” he said.

The petition also welcomes donations, which will be put towards the women’s legal fees.