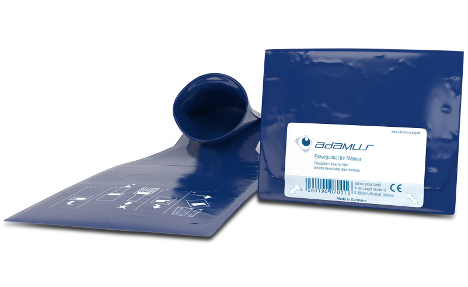 The disposable single-use urinal has been developed to answer the call of nature when public conveniences are, well, inconvenient.

The Adamus weighs just 26 grammes and can be folded into a handy 13x10cm rectangle for today’s incontinent on the go. It holds up to three-quarters of a litre of liquid.

Men get a hole, six centimetres in diameter, through which to direct their golden streams of waste fluid, while the lucky ladies get an extra funnel attachment, coloured pink and catchily named “Pippi Lissi.”

Once filled, the pocket toilet is designed to be sealed and thrown into a bin without spillage. “I can turn it upside down and none falls out,” Adamus marketing director Karsten Nordhausen promised The Local.

The bags, which cost €1.49 for a single or €129 for a 100-pack, contain super-absorbent polymer crystals, which can absorb “1,000 times their own volume in liquid,” according to Nordhausen. These crystals then turn the liquid into an odour-free gel within 20-30 seconds.

But he offered a word of warning about the urinal’s capacity. “Three-quarters of a litre is plenty for everyday use,” he said. “But some people with, shall we say, trained beer bladders might need to be careful.”

Adamus originally marketed the urinal as an emergency product for “people in hot-air balloons, crane drivers, truck drivers,” but recent political developments in the city have played into the firm’s hands.

“The urine stink is a big problem in Cologne, especially round Karneval time,” he said. “So we picked up this political issue and decided to use it for our promotion.”

Nordhausen has since taken to handing out his disposable bags at major events like the public viewing venues during the European Championships. He has also been offering demonstrations – with water.

“I was hanging round near the bushes at Christopher Street Day and other street festivals, and when people disappeared, I caught them coming out,” he told The Local. “And then I said, ‘Here, for next time.’ ”

“It’d also be really good for young people going to festivals,” he added.