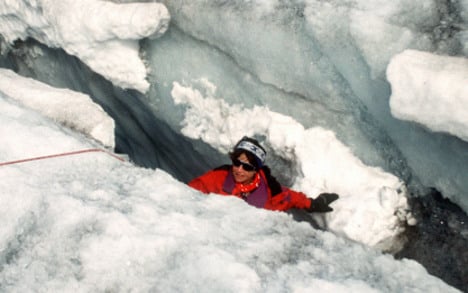 The man was stuck in an alpine crevice like this one. Photo: DPA

The unnamed German man was only slightly injured but hypothermic and exhausted, police officer Hansjörg Knoflach said. The man, thought to be in his 70s, was flown by helicopter to a hospital in Innsbruck, Austrian daily Die Presse reported.

The man said he had set out about a week ago from Westfalenhaus in the Stubai Alps in Tirol. At an altitude of 3,000 metres, he fell into a 20-metre deep cleft that had been covered in soft snow.

Authorities were astounded he survived.

“He got really lucky,” Knoflach said.

Austrian police are trying to verify his story and attempting to figure out how he could survive for such a long time in hostile conditions.

The crevice would have protected the man from wind, but it was still cold and wet. It’s also unclear whether he had any provisions with him.