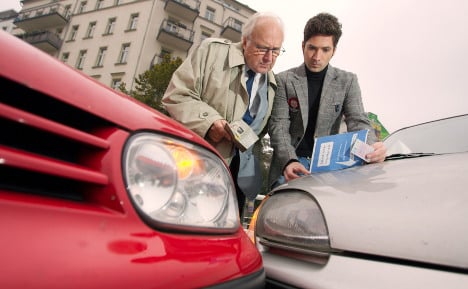 “We have additional personnel needs from the new forms of criminality. We have to drop some tasks,” said Hubert Wimber, president of the Münster police.

“We are clarifying the situation for insurance companies and it regularly requires two colleagues and costs them one to one-and-a-half hours of time,” he said in an interview with the west German WAZ media group.

Calls to minor accidents where the worst damage is a dent or scratch takes up around a third of all police time, he said, calling for them to no longer be the business of police officers.

Accompanying special transports or extra wide loads should also no longer be a job for cops, Wimber said. He said specialist private firms could easily take over such tasks.

But Wimber’s suggestions were firmly rejected by both police unions.

“The recording of road traffic accidents must remain in the hands of the police, even when they are accidents involving only minor damage,” said DPolG police union chairman Rainer Wendt.

And Frank Richter, head of the North Rhine-Westphalia GdP police union said, “Citizens have a right that circumstances surrounding an accident are established and recorded by a neutral party.”

He told the Bild newspaper that those involved may not be able to act rationally following an accident, while if police were absent, crimes such as drink driving or deliberate provocation might go undiscovered.

European motoring association Auto Club Europa (ACE) warned of an, “enormous loss in trust for the police,” if Wimber’s suggestions were enacted. Having police records of even minor accidents prevents insurance fraud, he said. “The police must be involved here and cannot simply reject their duties,” said ACE legal representative Volker Lempp.

But Germany’s motoring association, the ADAC, said it was open to the idea. Spokeswoman Katharina Bauer told the Bild newspaper, “The ADAC also does not consider it necessary that the police should come to every minor damage situation, for example, when one car hits off the mirror of another. But it is for the law makers to regulate when a situation can do without the police and how the damage can be established.”

North Rhine-Westphalia Interior Minister Ralf Jäger rejected the withdrawal of police from minor traffic accident duties – but did agree that special transports, “could be accompanied by specially qualified private companies.”