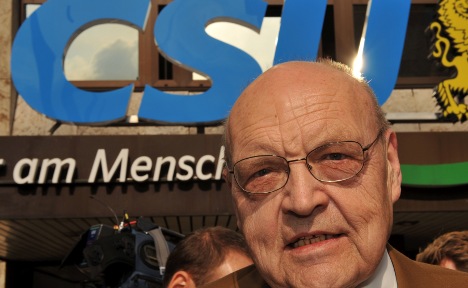 The 73-year-old Wilfried Scharnagl, a well-known name within the CSU – the sister-party to Angela Merkel’s Christian Democratic Union – is to publish a book this week entitled “Bavaria Can Go It Alone,” the Münchner Merkur reported on Sunday.

“Bavaria,” he told the paper, “comes out too badly in context.”

That context, laid out in his 191-page tome, is an historical analysis going back to 1871, when Bavaria became part of the new unified German nation. That day, “The Day of Disaster,” as Scharnagl calls it in a chapter heading, was when “the kingdom was absorbed into the Prussian-ruled German unified state.”

As a result of that fateful move, Bavaria is now in a “stranglehold”, held in “double oppression” by Berlin and Brussels, the Bavarian veteran said.

He describes some of Germany’s budget arrangements, such as the inter-state fiscal adjustment which distributes tax money among Germany’s 16 states, as a “plundering” that consumes billions in Bavarian wealth, while the euro debt crisis reinforces the “lurching between fantasies of power and powerlessness.”

He argues that federal measures to balance conditions in Germany have always damaged standards in Bavaria, such as the level of education, which he calls Bavaria’s “crown jewel.” “I’ve never known levels to be adjusted upwards,” he said.

Scharnagl worked for the CSU’s party leadership in Bavaria for many years, and was editor-in-chief of the party’s newspaper Bayernkurier for 24 years. He was also considered a close personal advisor to Franz Josef Strauß, former German finance minister and Bavarian state premier from 1978 to 1988.

Scharnagl’s word is still said to carry weight within the party, though the new book is likely to alienate some of his political allies. Only the minority separatist Bayernpartei officially supports independence. His own party briefly toyed with the practicalities of independence under state premier Max Streibl in the early 1990s.

Scharnagl considers his book an important provocation. “It is at least a wake-up call, to say that this state should consider its strengths, its peculiarities, its uniqueness,” he told the paper.