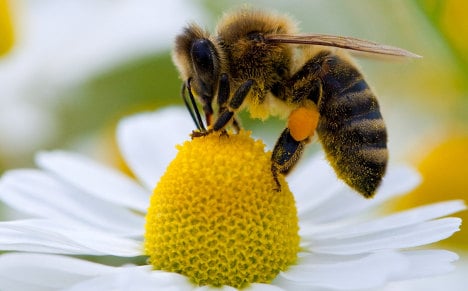 “For beekeepers, growing wild plants for biogas installations would be the ideal alternative to corn,” said Petra Friedrich of the German Beekeepers Association.

As Germany transitions away from nuclear energy, the production of biogas has become increasingly important.

New biogas plants are cropping up around the country, and at present there are about 7,100 in Germany, many of which use corn as fuel. And that’s a problem for bees.

“Corn isn’t that attractive for bees,” Friedrich told The Local. Bees, especially wild ones, often depend on certain varieties of flowering plants.

“If they disappear, so do the bees,” says Friedrich.

Germany’s corn monoculture has environmental experts worried for other reasons too. Exclusively planting one crop can also lead to soil depletion and disrupt local ecosystems.

Previous studies have shown that wildflowers have only about half the energy yield of corn. But many are hopeful that new mixtures could prove more effective. Friedrich says government incentives will probably be necessary to get farmers on board.

Biogas Council managing director Reinhard Schultz sees wildflowers as a good alternative, along with better use of scrap food from restaurants or hop production.

“Our image of the field is changing massively,” he said.

He emphasized that biogas was not primarily to blame for the corn problem – the demand for animal feed at big factory farms was also a factor.

Meanwhile Petra Friedrich is quick to point out that maintaining bee populations has ramifications far beyond keeping honey on the breakfast table, and it may be difficult to know just how dire the situation is until it’s too late.

“A beekeeper notices when something is amiss with his hive,” she says. “But when wild bees begin to disappear, that’s noticed either much later or not at all.”