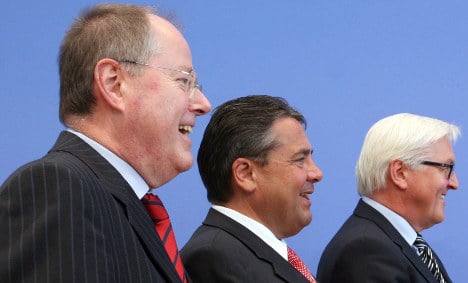 Until now they have avoided making a decision on which of them will lead the party against Chancellor Angela Merkel in next September’s election.

Most indications suggest the outcome will produce a grand coalition between the SPD and Merkel’s Christian Democratic Union – meaning the SPD leader will most likely become vice chancellor to Merkel.

In an attempt to keep their powder dry – and reduce the bruising explicit campaigning to a minimum – the party had planned to keep the decision until after the Lower Saxony state election in January.

But Schleswig-Holstein state premier Thorsten Albig broke cover on Sunday and came out firmly in favour of Steinmeier – who led the party to defeat against Merkel four years ago.

This prompted Kiel MP Hans-Peter Bartels and SPD leader in Baden-Württemberg Nils Schmid to fly their flags for Steinbrück on Monday, saying only he offered a real alternative to Merkel.

Yet it would seem that Gabriel holds all the cards – the Süddeutsche Zeitung pointed out on Monday that he could give himself the job simply due to his position as party leader.

The paper suggests that the issue of pensions could decide the matter. The SPD rank and file would expect that as soon as it gets a chance, the leadership would roll back many of the changes made by the government over the last few years.

This would either cost billions or result in rising pension contributions.

Steinmeier and Steinbrück would not be happy standing as lead candidate if it meant they had to reverse pension reforms that both promoted when in office, the paper said.

Opinions on whether Gabriel would make such a compromise – and whether he wants to lead the campaign and take on Merkel – are split throughout the party, the paper said.

None of them are betraying any great passion for the job, with Gabriel maintaining a silence which some interpret as recognition that, as the least well known of the three – despite having served as environment minister between 2005 and 2009 – he would not be able to deliver a good result.

Both Steinmeier and Steinbrück have said they would take on the job, but only if the conditions were right.

Steinmeier’s calm manner makes him marginally more popular than Steinbrück in the party, the paper said, although whether this is reflected among Germans is another question.

Although they would all be happiest leaving a decision until the start of next year, an earlier move may be forced upon them – not only are their supporters speaking out, they risk losing what momentum they might have.

The troika is not producing any excitement, the paper said – and the party risks seeming indecisive, leaving not only voters but the party faithful without a credible leader.