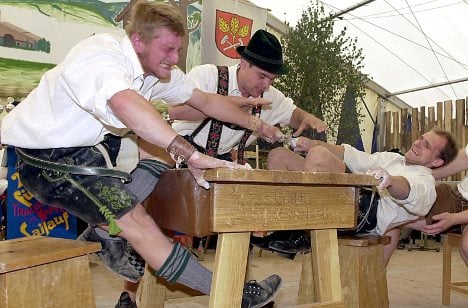 The unusual competition is essentially a one-finger tug-of-war. Competitors, many of them sporting traditional Bavarian lederhosen, sit across from one another at a table, locking a single finger – usually the middle one – into a leather ring.

The referee then blows the whistle and each man attempts to pull his opponent across the table. The winner is whoever manages to drag the other over the halfway mark twice.

This year’s victor was the team from Ammergau.

Finger-pullers must not only be strong, but also have a high pain tolerance: bloody fingers are all part of the traditional Bavarian sport.

“When you’re on stage during the competition, you don’t notice if you’re in pain or not,” said Georg Brandhofer, a member of the Isargau Club, which hosted this year’s competition.

The 17-year-old Brandhofer began training months ahead of Sunday’s competition, using weights and expandable bands to strengthen muscles and tendons in his hands and arms.

According to legend, the Alpine sport was once a way of settling disagreements. It’s now a regulated sporting event in Bavaria and parts of Austria, with guidelines governing everything from the size of the tables to the circumference of the leather bands and the competitors’ weight classes.

Another strict rule: Women are not allowed to compete. “It just does not fit,” said Thomas Kell of the Isargau Club, explaining the rule.