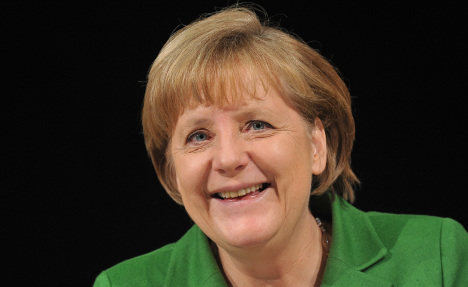 The Süddeutsche Zeitung enlisted a range of German celebrities to ask Merkel questions and published the results on Friday.

When asked by tennis professional Andrea Petkovic whether she always had a joke at the ready, Merkel replied simply, “Yes, always.”

Actor Olli Dietrich asked her what she had thought when George W. Bush gave her an impromptu shoulder massage during the G8 summit in 2006. “That George Bush wanted to make a joke,” she replied, despite the video widely circulated at the time of her startled reaction.

And when she was asked by Green politician Claudia Roth whether she also found it irritating that women politicians were put under more scrutiny than men when it came to their appearance, Merkel simply said, “It has become part of my life.”

When asked by national footballer Philipp Lahm what she has had to sacrifice for the nation Merkel remained with her feet on the ground. “I have to do without being able to go shopping unrecognised,” she replied.

Even the whimsical questions were calmly batted away. Author Roger Willemsen asked her what her second identity would be if she could lead a double life. “I have neither the time nor interest in this idea,” she said.

A chink opened when former cycling hero Jan Ullrich asked what she had learned from childhood sports. “I was obviously so untalented that I was not considered suited to any kind of sport,” she said.

Yet she chose a sportsman as her dream dinner date. When Boris Becker asked who she would invite to a dinner party and why, she chose the Spanish national football team coach. “I do not hold dinner parties. But I would like to invite Vicente del Bosque to dinner one time,” she said.

The Spaniard honoured his reputation as a gentlemen – when asked about her comment at a press conference on Friday, he said he would be, “delighted to invite her or for her to invite me.”

“If I had to invited her to dinner I would do so. And I would pay,” he added.