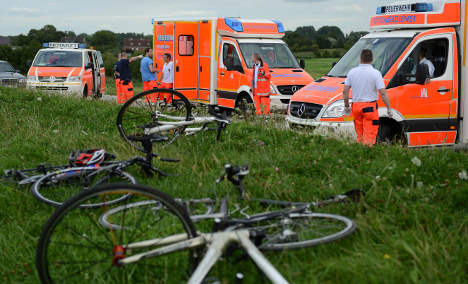 The 33-year-old rider was injured so severely that he died at the scene, while two others were taken to hospital, the Hamburger Morgenpost newspaper reported on Friday.

The driver of a 7.5-tonne truck was travelling along a fairly straight road near Hamburg when he moved out into the other lane to overtake a cyclist – without noticing a group of around 30 cyclists coming towards him.

There was no way the driver could stop his truck in time and he smashed into the leading cyclists of the group – students and staff from Hamburg University who went on regular training rides along that route.

Three of them were knocked from their bikes and despite the efforts of his friends, the 33-year-old died on the road. Emergency crews tried but failed to resuscitate him, before taking two of his friends to hospital. The truck driver was also treated for shock.

Police have launched an investigation.