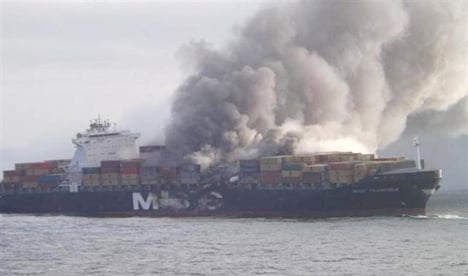 “I think it’s ridiculous that a ship sailing under a German flag in this situation can’t get permission from countries in the European community,” said Helmut Ponath, head of the shipping company NSB, on Thursday.

Fire broke out on the appropriately named “MSC Flaminia” for unknown reasons in mid-July, when it was en route from Charleston, US, to Antwerp, Belgium.

One sailor was killed while another is still missing. The rest of the crew and two passengers were successfully rescued. The huge boat was floating around in the ocean unmanned and ablaze for some time until salvage workers were able to get aboard.

The fire has now been brought under control. The shipping company says the situation on board is stable, but there could still be small fires in individual containers.

Salvage workers have been on board in the past few days, though they have been hindered by bad weather. Ponath said that salvage work would be difficult unless the ship finds a port.