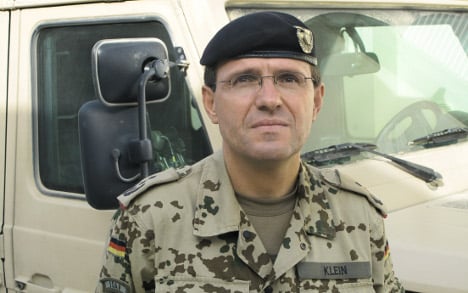 Colonel Georg Klein, 51, has been offered a job as division director in the new federal office for personnel management, a position that includes an automatic promotion to general.

The post is being created by the merger of the army’s military and civilian personnel departments. He is currently working in the military section, but is expected to take up the new job next spring.

In September 2009, Klein ordered a NATO air strike on two oil tanker trucks in Kunduz that killed over 100 Afghans, most of whom are thought to have been civilians.

Klein was investigated by German state prosecutors, though the investigation was dropped, and the Bundeswehr also dropped any disciplinary proceedings after several months.

The promotion effectively absolves him of any wrongdoing, even though his seniors were sacked following the scandal.

The Kunduz affair cost the job of Labour Minister Franz Josef Jung, who was defence minister at the time of the attack, after it emerged that he had misinformed parliament about the extent of the killing of innocents. His successor Karl-Theodor zu Guttenberg then sacked Bundeswehr Chief of Staff Wolfgang Schneiderhan and Defence Ministry Secretary of State Peter Wichert for allegedly withholding information from him.

Karim Popal, the lawyer representing the victims, has strongly criticized the decision to promote Klein. “The promotion would be a slap in the face for the Afghan civilian population would be like a declaration of war,” he told Thursday’s edition of the Neue Osnabrücker Zeitung.

Green Party MP Hans-Christian Ströbele, a long-time opponent of Germany’s military intervention in Afghanistan, said the “catastrophic bloodbath” that he said Klein was responsible for should rule out any promotion.

An Amnesty International report on the air strike listed 83 names of victims, several of whom were under 16 years old. The report also said many people had died because the usual warning flyovers had been omitted.