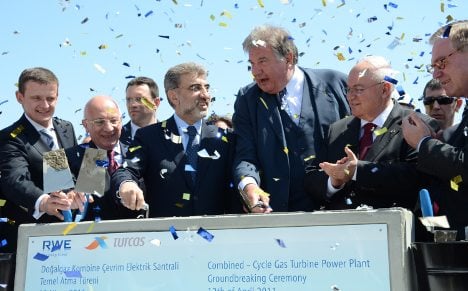 The Turkish economy is the envy of the crisis-wracked eurozone: its gross domestic product (GDP) has expanded by an annual average 5.4 percent over the past 10 years. Its public debt has fallen below 40 percent of GDP, much lower than the majority of European countries. And inflation, which was once dizzyingly high, is now under control.

Turkey has a population of 74 million, of whom more than 60 percent are 35 years old or younger. And with purchasing power growing from year to year, there is strong demand in areas such as infrastructure, energy, cars and the financial sector.

These are precisely the sectors where German companies excel: out of around 30,000 foreign companies in Turkey, nearly 5,000 are German, according to the German-Turkish chamber of commerce in Istanbul.

Indeed, the number of new German-funded companies set up in Turkey last year shot up by 14 percent to 534.

Tedrive Steering, a maker of steering systems and components for the automobile industry, is one of them. The small specialist engineering firm, based in Wülfrath in Germany’s industrialised Ruhr region, has selected Turkey as the site for its first overseas assembly plant.

RWE, Germany’s number two power supplier, is investing 500 million euros ($615 million) in the construction of a gas-fired combined cycle power plant at Denizli, in the south west of Turkey, to supply some 3.5 million households with electricity.

The plant is scheduled to be up and running at the end of 2012.

RWE and other German companies can benefit from the close social and economic ties that Turkey and Germany have enjoyed for decades.

Germany is in fact Turkey’s main trading partner, accounting for 10.3 percent of its exports and 9.5 percent of its imports, according to data published by the Germany Trade & Invest development agency.

Germany invited hundreds of thousands of Turkish “guest workers” to come and work during the country’s economic miracle back in the 1960s. They stayed and some three million Turks now form the largest immigrant population in the country.

Indeed, it is the younger generations of those immigrants – Germans of Turkish origin who are equally at ease in both the Turkish and German languages and cultures – who are increasingly being recruited by German companies for their Turkish operations, said Jäger.

A private training centre in Kreuzberg, a multicultural district in the heart of Berlin, offers apprenticeships in German, English and Turkish in industry and in the hotel sector, with placements in German companies in Turkey.

“We want to train young people who will eventually be beneficial to the German economy,” said the centre’s chief Nihat Sorgec, himself of Turkish origin.

“At the same time, it helps to dispel the image of Turks being socially underprivileged. So it’s a win-win situation,” Sorgec said.