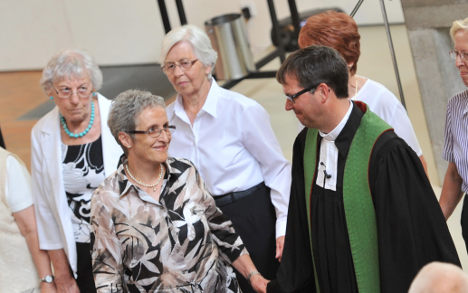 Ralf Schmidt of the Erlöserkirche (“Church of the Saviour”) in Wiesbaden, western Germany, had promised a service celebrating the divine element of physical love, news magazine Der Spiegel reported on Sunday.

“There is no life without eroticism, and no life without God,” he said during his sermon, the Frankfurter Rundschau newspaper reported. “Taste each other, look at each other, feel each other, feel how friendly life can be. My backside, my hands, my tongue, my penis, my earlobes are the landing spots of love. In this way we want to enjoy what God has given us, even though we don’t have paradise anymore. Because love comes from God, not the devil.”

Later, he led his 200-strong congregation in a swaying dance as they held hands to foster a sense of intimacy, while the organ played Elvis Presley’s “Love Me Tender.”

He opened the service with the words, “Welcome to the vineyard of love,” before waxing lyrical on the under-addressed subject of Christian sex. “There is a lustful sense of expectation in the room,” he said.

Schmidt argued that the subject of sex is not brought up in churches often enough, but then is vulgarly overhyped in the media. So he had a recommendation for his fellow men of God: “Maybe we should get into bed with our loved ones more often, so our words become sharper and more alive.”

“These expressions were all over the newspapers this week,” he said. “I didn’t need to add to them.”

The service does not seem to have alarmed Schmidt’s flock either. “The sermon was very impressive and courageous,” said Marie-Luise Reichel. It was, she said, “vivid and direct.”

Even its senior members weren’t shocked. The 70-year-old Helga Gropp told Der Spiegel that she’d liked the service a lot. Her only objection? That the newly-confirmed youngsters had not been allowed in.