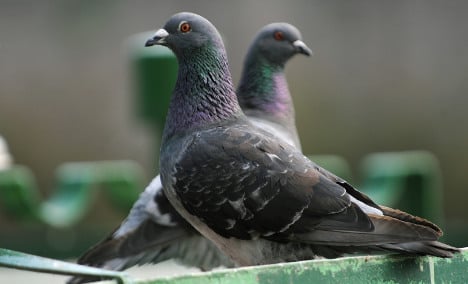 Figures from the nature protection society Nabu say there are only around 10,000 town pigeons left in the capital, down from up to 30,000 thought to have been there in 2001. And although there are no recent figures in Frankfurt, officials say that complaints about them have declined over recent years.

One of the causes is building renovation, which is undertaken without any consideration for providing space for birds to nest, Lars Lachmann from Nabu told the Frankfurter Rundschau newspaper at the weekend.

He said wartime ruins, which could still be found particularly in Berlin and other eastern cities until recently, had provided ideal accommodation for many birds, town pigeons included. They build their nests on ledges where there is some shelter.

Nets, wires and spikes installed on buildings to discourage the nesting also seems to have had a significant effect – as has the ban on feeding pigeons, as introduced in Frankfurt in 1970.

Officials there have also been swapping pigeon eggs with artificial fakes to reduce numbers, while hawks have been breeding successfully in many cities. In Berlin for example, there are so many hawks that bird watchers have travelled from the UK to see them, the paper said.

While the town pigeons are on the decline, their space in the city ecosystem is being taken up by wood pigeons, attracted from the increasingly unattractive countryside, where hedges and other nesting spots are being uprooted. They benefit from the trend towards greener cities, as they nest in trees.

The number of crows in cities are also on the increase, said Lachmann, as they also move out of the countryside. A recent study suggested the number of field birds had halved in Europe since 1980 due to intensive land use.