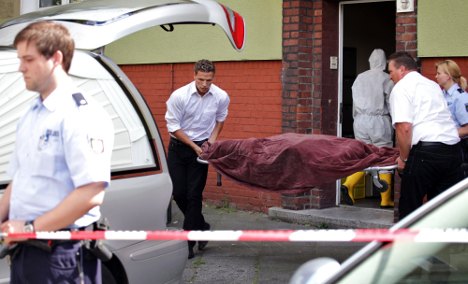 The fire broke out in the family’s ground floor flat in Dortmund, North Rhine-Westphalia. Fire fighters called to put it out found a severely injured 10-year-old boy – and his four-year-old sister and 12-year-old brother, both of whom were dead.

It emerged on Friday afternoon that the 10-year-old boy was the victim of an attack, the Westdeutsche Allgemeine Zeitungnewspaper (WAZ) reported.

The boy was taken to hospital but died there, authorities said on Friday. Autopsies were Friday afternoon being undertaken on the bodies of his brother and sister.

Public prosecutor Barbara Cuntze said that there was evidence to suggest a ‘capital crime’ had been committed.

There have been no reports of arrests, but the children’s 42-year-old father had been seen outside the house being comforted by neighbours.

The children’s mother died some years ago, the Die Welt reported, adding that the father had lived alone with his children.

Some media reports said his girlfriend was being questioned by police, while he was being looked after by relatives.