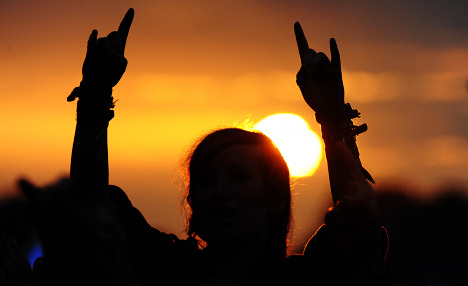 At least 75,000 heavy metal fans from 35 different countries descended on the tiny northern German town of Wacken, for the world famous Wacken Open Air Festival which will see more than 130 bands on seven stages.

Music runs from Thursday night until Saturday when legendary German rockers Scorpions will headline the main stage. Other big names will join them, such as Oomph!, Saxon and Bosshoss.

“We had some showers in the morning but now the sun is shining,” said a Wacken spokeswoman on Thursday.

Check out pictures of Wacken and Haltestelle Woodstock.

German President Joachim Gauck with his Polish counterpart Bronislaw Komorowski, to open the festival which has been running since 1995 and for the past few years has been held in the border town of Kostrzyn, just over an hour away from Berlin.

Music fans further south in the country also had reason to celebrate this weekend as Rock am Ring festival organisers announced that although its location – the Nürburgring – recently went bankrupt, the festival would still be held there for the coming two years.

And now, “months of worry can finally be put out of the way,” festival organiser Marek Lieberberg said on Wednesday.