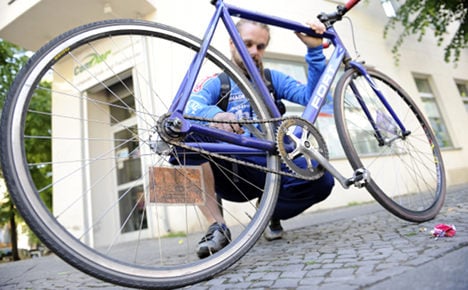 Open Design City invites the public to one of Berlin’s best-known co-working spaces for a chance to come and “hack” their bikes. Betahaus hosts the three-and-a-half hour workshop perfect for anyone looking to upcycle their bike, from the renovation of an existing cargo bike to building a generator or finishing an existing project. The workshop also functions as a sort of meet-and-greet for bike enthusiasts, with skilled experts on hand to assist with any kind of assembly challenge.

The city of Berlin’s waterworks company is throwing up a public party for Berliners of all shapes and sizes. Featuring local bands such as 17 Hippies and The Love Bülow on two different stages, the festival also offers patrons topical kiosks with information about anything they could ever want to know regarding life’s most basic need in the capital city. Food and drink will naturally be in full supply.

Since 1997 when the first City-Night starting shot rang out, Berlin has hosted one of its more exciting public night-time events in the western-central part of the city. From Tauentzienstraße on a circular course through Charlottenburg, you can catch some of Berlin’s most riveting inline-skating athletes – but only if you’re quick: rounds only last some 45 minutes. Spectators who hang around Breitscheidplatz will be able to cheer participants when they start – as well as when they reach their goal.

With more than a century of movie making under its belt, Hong Kong is no newcomer to the cinematic realm. In honour of the 50th anniversary of the founding of the special administrative region of Hong Kong, the Film Museum Düsseldorf is giving visitors the chance to experience a concentrated dose of this fascinating and successful film industry from independent productions to big-budget blockbusters. Those who make the opening ceremony on Friday at 7pm will have a chance at one of 50 free tickets for the highly-acclaimed “A Simple Life”.

Price: €22 for a festival ticket

Featuring headliners such as Paul van Dyke and Sven Väth, Nature One counts as one of Germany’s most popular techno festivals. An old rocket base in Kastellaun, west of Frankfurt, serves as the backdrop for the 300 DJs maintaining the beat with a swath of genres including hardcore techno, rave and trance keeping patrons on their toes. Tents provide space for festival goers to rest, eat and drink, while buses shuttle visitors to and from the nearby town of Kastellaun to clean up or restock on beer and snacks.

Originally geared toward fishermen and boatsmen, Mainfest is said to have evolved from the consecration of the Church of Three Kings in 1340. In paying homage to the river and its bounties, Frankfurters kick off the modern-day version of this festival with live music at the Römerberg. Carousels, fairground rides, games, tombolas and shooting ranges make this traditional folk festival one of the only true annual family festivals in the Frankfurt.

One of the largest summer festivals in Germany brings millions of patrons to the shores of the Maschsee, a lake at the centre of Hanover. From concerts to performing art shows, the festivities kick off and wrap up with a fireworks display over the water. Visitors can even “stage-hop” via the boats shuttling up and down the lakeshore during 19 days of food, drink, music and art that prove a satisfying way to round out the summer.

Members of the Black Forest village Mambach gather once a year to recreate pre-medieval Germany in honour of the Germane Fescht. Months of preparation precede the three-day celebration, which includes special food, an assortment of beer and even competitions such as a “Germane Triathlon” and a hair-raising potato sack fight. Culinary wonders recreated for the second annual installment of this spirited festival include lard bread, suckling pig on a spitfire, mead and of course schnapps to aid in digestion.

This co-celebration (Hamburg hosts an installment in May) of board sports takes place in the Bavarian capital again this year along with the Surf & Skate Film Festival. Featuring an array of relevant films, workshops, art exhibitions and even musical performances, the festival aims to draw all kinds of patrons from experienced riders to those who simply want to view water and/or asphalt from a new perspective. Organizers say the exchange of experiences, values and impressions in relation to board sports are the most important aspects of the event.

Since its inception in 1990, this dedicated metal festival has grown to host some 80,000 fans near the town of Wacken in Schleswig-Holstein. What began as a small gathering for local bands took no longer than eight years to become one of Europe’s most important metal events. Some 70 bands from Europe, North America and Australia fill the bill each year covering genres from black metal, thrash metal and folk metal right down to hard rock. Festival goers camp on the edge of the main festival grounds, and bands play on four stages.

READER INSIGHTS
‘A megacity on a smaller scale’: An insiders’ guide to life in Frankfurt
Url copied to clipboard!