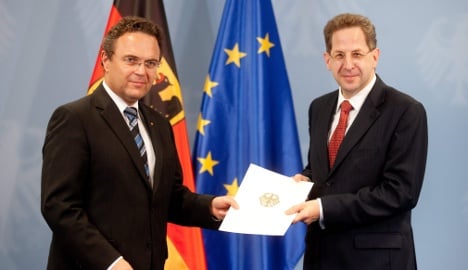 Interior Minister Hans-Peter Friedrich appointed Hans-Georg Maaßen to head up the domestic intelligence service to replace Heinz Fromm who resigned after 12 years in the job over failures in the investigation of a neo-Nazi terror group.

He then appointed Dieter Romann to lead the federal police, just a couple of days after sacking the previous head Matthias Seeger and transferring his two immediate deputies.

Seeger refused to go quietly and attacked Friedrich on Tuesday, saying his sacking was part of a power grab by the interior minister – and that he had heard about it from the press.

“My impression is that Friedrich wants to put people from his own ministry into leadership positions at all the German security authorities before the federal election in 2013,” he told the Bild newspaper. “They should serve as an extended arm of the interior ministry and not offer too much criticism.”

Friedrich was also attacked by police unions, with Thomas Mischke, head of the BDK association of federal police saying, “It is inexcusable to publicly demolish, humiliate with refusal to communicate and then fire, the head of an authority with 40,000 employees.”

But the interior minister was unrepentant – and refused on Wednesday to say why he had cleared out the top tiers of the federal police, the responsibilities of which include Germany’s borders, taking care of security at airports, and overseeing the GSG9 special commando unit.

“When the trust in a leadership functionary is no longer there, and the collaboration has to be ended as a result, it is not a tough crackdown, rather it is simply the logical thing to do,” he told the Hamburger Abendblatt newspaper on Wednesday.

He said he was disappointed by the criticism of his actions. “When I am accused of bad form, it always disturbs me. I wanted to inform Mr Seeger personally. At the end of the day it was my personal decision to let him go,” he said.

Friedrich received support from Chancellor Angela Merkel, whose spokesman said on Wednesday that the interior minister had her full backing.