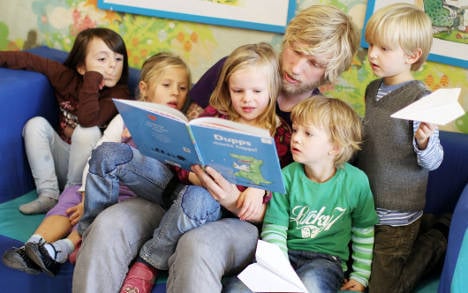 A law guaranteeing day care for every child between the ages of one and three, enabling their parents to return to work at least part time will take effect on August 2, 2013. But much work remains to be done, according to figures from the German association of local authorities.

Gerd Landsberg, manager of the association, said that by next year a total of 750,000 places would be needed – yet currently there were only 620,000 available.

He said he was sure the target would pretty much be met, but admitted, “it will not be possible in every case that the child will be able to go to the day care centre of the parents’ choice.”

Authorities in larger cities in particular were having difficulty finding suitable buildings for new day care (kita) facilities – and bureaucratic rules were not helping, he said. “Whoever wants to build a kita in a town has to have their own playground, even if the next public playground is right next door,” he said.

Landberg called for firms to organise more day care centres, saying they needed to do more to reach the target of providing 39 percent of all places. Smaller companies could work together to provide child care, he suggested, noting that subsidies were available for such initiatives.

Child care provision was something for the whole of society, he said. Those companies complaining that they needed young mothers to fill skilled jobs, “must also offer their workers something” to tempt them back to the workplace, he said.

The controversial child care payment which gives €150 a month to parents who do not send their young children to day care will not help in this respect, he said. “The young mothers who want to return to their careers quickly… want to earn more money. And they will not be diverted from this by €150 a month,” he said.

Parents in Germany have had the right to a kindergarten spot for children from the age of three until they start school, since 1996. The day care law, passed in 2008, guarantees child care for kids between the ages of one and three from August 2003.