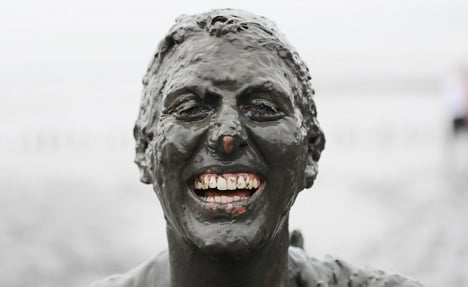 This year’s ninth annual Wattolümpiade saw 34 teams descend on the town of Brunsbüttel, where they spent the day battling it out on the Elbe river mud-flats for medals in football, volleyball, handball as well as an enthusiastically received new addition – mud sledging.

Running under the motto “dirty sport for a good cause”, entrance fees went towards a local counselling service for cancer patients and organisers are hoping that this year’s profits match last year’s which totted up more than €150,000, the Frankfurter Rundschau newspaper reported.

Many of the competitors turned up in costumes and entire families dressed as rock band Kiss were spotted, as well as a gaggle of men calling themselves the Schlammburger Jungs Olé who all donned big plastic bottoms for the event.

Check out the muddy action, here.

State representative Oliver Kumbartzky seemed less body conscious, but said although perfect sporting skills were not vital to the event, he planned to get fitter and join a football team to take part soon.

According to seasoned alternative-athletes, the trick is to “grip your opponent and force them into a mud-wrestle,” said competitor Insa Krups.

She didn’t say how this would help in a game of football though, which could explain why she then said “I’m happy if we even make it past the first round.”

Unlike the London Olympics though, athletes don’t have to worry about strict drugs testing. Many begin the party before the games had even begun – one competitor from the “Chemie Gladiatoren” team replied “never!” when asked if he and his team were sober for the kick-off.