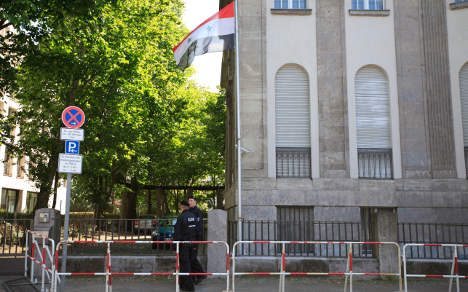 The 35-year-old man named only as Akram O., was one of two embassy employees arrested in February when the German government expelled four members of the Syrian diplomatic corps after uncovering what it said was a spy ring.

Germany expelled Syria’s ambassador at the end of May in response to Bashar al Assad’s regime killing at least 108 people in a massacre in Houla. Since then the violence in Syria has worsened despite increased sanctions against the regime.

The recent attacks on Aleppo, where many opposition fighters are based, were “criminal acts”, Foreign Minister Guido Westerwelle said.

“Attacking residential areas with heavy artillery and from the air is unspeakable,” he told Monday’s edition of the Stuttgarter Zeitung newspaper.

He called again for Russia and China to stop supporting the regime.

In Berlin, Der Spiegel reported on Sunday that Akram O., would be charged with 35 cases of spying activity. The federal prosecutor confirmed the report, saying that further evidence was being gathered.

Akram O. had been delivering information from Germany since 2008, Der Spiegel reported. The charge sheet against him says he was primarily spying on members of the Syrian opposition in Germany, but had also delivered information on German political parties and political foundations, the magazine said.

He is accused of secretly recording a conference on the Syria conflict held by the Social Democrat-linked Friedrich Ebert Foundation, and personally taking the recording to Damascus.

He is also accused of collecting information on a Syrian doctor in Berlin and passing it on to authorities in Syria. The man’s relatives were later interrogated by the Syrian secret service, the magazine said.

And Akram O. allegedly tried to infiltrate the German domestic intelligence force, applying at the end of 2010 to join the Federal Office for the Protection of the Constitution.

His lawyers told Der Spiegel he denied all the charges and said they were based on misunderstandings.

But the federal prosecutor suspects he was part of the spy ring operating from the Syrian embassy in Berlin.

Investigations are being conducted into four more alleged agents, including the 47-year-old German-Lebanese man named as Mahmoud El A., who was arrested along with Akram O. in February. Police have also searched the flats of a further six people accused of having taken part in the spying operation.