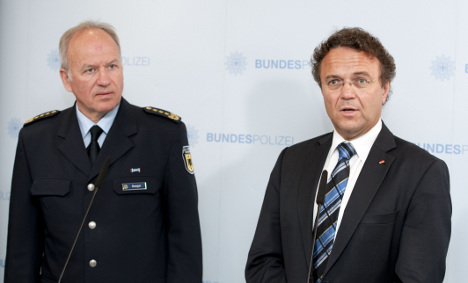 Interior Minister Hans-Peter Friedrich is set to replace the entire leadership of the federal police force in one fell swoop, Focus magazine reported on Saturday.

The reshuffle, confirmed by government sources, will see the forced resignations of not only police president Matthias Seeger but also his two deputies Wolfgang Lohmann and Michael Frehse.

While Friedrich’s motives for the dramatic reshuffle remain unclear, the removal of Seeger was said to be connected to his contacts to authorities in Belarus, as well as internal conflicts in the police force, which the top cop appeared unable to take in hand.

Other reports point to a lack of trust between the interior minister and the police leadership, after sensitive internal matters were repeatedly leaked to the public, wrote the Süddeutsche Zeitung newspaper on Sunday.

Police unions are outraged by the sackings, which have yet to be officially confirmed by the Interior Ministry.

“The style of the incremental public personal smear campaign against a top police officer with false accusations is completely unacceptable,” head of the GdP police union Josef Schuring said on Saturday.

Meanwhile, chairman of the DPolG police union Rainer Wendt described the affair as “sordid and indecent.”

“This is not the way to deal with successful police chiefs who have always shown loyalty and fulfilled their duties,” he said.

In comments published in the Bild am Sonntag newspaper, government domestic affairs expert Wolfgang Bosbach called on the new leadership and politicians to make sure that “the federal police can concentrate in future 100 percent on their core task, ensuring security.”

Federal police responsibilities include Germany’s borders, and taking care of security at airports, as well as overseeing the GSG9 special commando unit.

Dieter Roman, the current head of the Interior Ministry Anti-Terrorism Unit is thought to be marked out for the top police job, whereas according to Focus the deputies are likely to be replaced by two top ministry officials, Jürgen Schubert and Franz Palm.

The interior ministry is thought to have scheduled an official announcement for this Wednesday’s cabinet meeting on August 1.