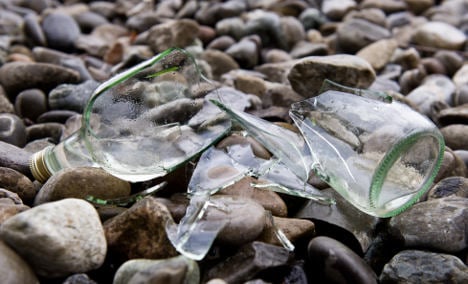 Benjamin Wohnhaas, 24, said there was no good reason for the ban – nor the €100 fine for non compliance. He sued Constance city, saying the rules were arbitrary, and a court on Friday said he was right, overturning the ban.

The city authorities banned all glass from parks and the banks of the lake last year, saying it would reduce vandalism, rowdiness and injuries from broken glass.

But Wohnhaas said the Glas verboten sign was a “disproportionate violation of the freedom of the individual.”

He and his lawyer argued too many people had been affected in comparison with the few who had misbehaved. And ultimately, Judge Volker Ellenberger, President of the Administrative Court in Mannheim, agreed.

“In order to prevent potential dangers, many people’s rights were limited,” said the Ellenberger.

The ban was unnecessary, he ruled on Friday, overturning it with immediate effect.

The city authorities did not have enough evidence of bathers being injured by broken glass in the water.

“It’s just not possible to document it,” said Caroline Binkert-Brugger, who represented the City of Constance in the case. Many injuries had been treated by family doctors and had not been registered, leaving the city without hard numbers to back up its case, she said.

“We tried many mild measures, only the ban on glass bottles worked up to now,” she added.

“But that hasn’t been proven,” said Ellenberger, pointing out that mussel shells on the lake bed could have been equally responsible for any injuries.

In his battle against the ban, Wohnhaas received support not only from the local youth branch of the Green party, but also from local drinks manufacturers worried about the competitive advantage for companies selling their drinks in plastic bottles.