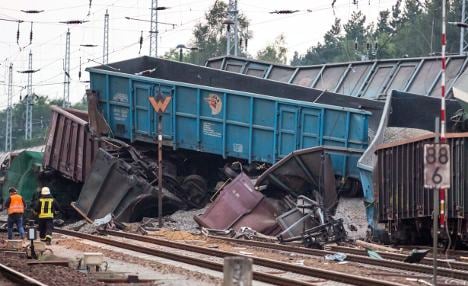 The gravel train hit a standing, empty train near Senftenberg, in the state of Brandenburg, on Thursday evening and smashed into the signal box. Sniffer dogs were brought to the scene on Friday morning to help search for the man.

Police said the rescue efforts were particularly tortuous because the gravel had to be moved as well as the wreckage of the signal box building.

The accident happened when the gravel-filled train went through a stop signal for as yet unknown reasons. The force of the collision derailed three of the gravel-filled carriages, which then slammed into the signal building.

Both train drivers were also severely injured in the accident. One was treated in a nearby hospital, while another was flown by helicopter to a hospital in Dresden, but police released no further details on their condition.

The accident had repercussions for the local passenger network, with regional rail services between Dresden and Hoyerswerda, and Leipzig and Hoyerswerda severely disrupted. Some services are to be replaced by buses over the weekend, a Deutsche Bahn spokesman said.