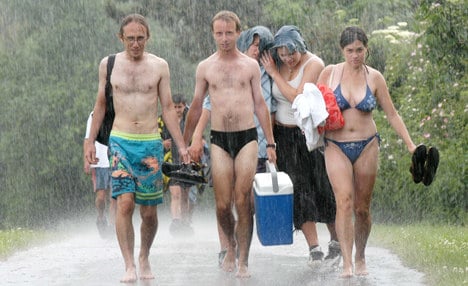 Temperatures were as high as 35 degrees Celsius on Wednesday and Thursday, with even Thursday night expected to be significantly warmer than 20 degrees.

The following couple of days could see the mercury climb to a truly summery 36 or 37 degrees, the German Weather Service (DWD) said on Thursday.

The entire country should wake up to blue skies and scattered clouds on Friday morning. But as the day progresses, western and north western states could see clouds beginning to gather and even the odd heavy downpour accompanied by a thunder clap or two.

Everywhere else though, the day will be a gloriously sunny one, with temperatures reaching highs of between 27 and 34 degrees Celsius. There will be little relief from the wind though, as any breeze will remain light.

Those in north western and western areas will see clouds gather during Friday and should be ready for a wild night, with heavy rain, gale force winds, lightning and even hail on the cards according to the DWD.

In the south and east it should remain dry though and temperatures will reach lows of between 16 and 21 degrees.

Saturday will, like Friday, begin with warm and dry in the east. In the west though, relatively heavy cloud cover could result in rain any time through the day.

The east and south east will stay pleasant with temperatures between 28 and 34 degrees Celsius while rainier parts of the country should cool to between 22 and 27 degrees.

Storms will spread across central and eastern Germany on Saturday night said the DWD, marking the arrival of cool air pushing forward from the North Sea. It will be hot and sticky in the east and cooler in the west.

Sunday’s weather is expected to be mixed – and largely unpleasant, as heavy rain, storms and gale force winds are predicted to whip across the country. It will remain hot, with highs of 28 degrees. Along the coast it will be cooler, with highs of 19 degrees.

Clouds will begin to clear on Sunday night in the west, while rain could continue in the east. By Monday it will be cooler, but meteorologists at the DWD were keen to stress that temperatures would begin to rise by mid-week and that it should remain dry.