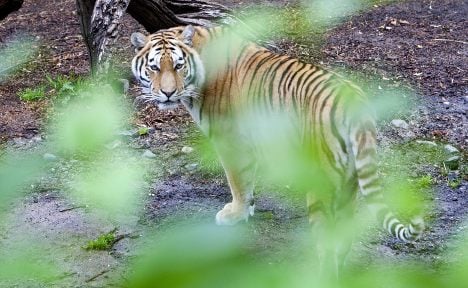 The teenagers from Augsburg called the police one after another, reporting an escaped tiger in the Siebentischwald forest area.

One even told officers he was calling while sitting in a tree while the tiger prowled around underneath, the Tagesspiegel newspaper said on Thursday.

Another said he was with his children, watching the tiger.

The cops launched a massive hunt for the animal, sending teams of volunteers into the woods, and using a helicopter with heat-detecting camera to try to track the tiger.

Authorities even took to the radio to warn people living nearby to stay indoors while the hunt continued.

The prank was discovered when one of the police officers called back one of the teenagers – and he admitted there was no tiger.

The boys, aged between 16 and 19, appeared before an Augsburg youth court on Thursday and apologised, admitting they invented the story and made the calls.

They had got up to a lot of mischief, said Roland Fink, spokesman for the court. “You do such things when you are young – and you have to then take [the punishment] on the chin,” he said.

The cost of the hunt, estimated to be between €5,000 and €7,000, was not part of this court hearing, but could be part of another one, the newspaper said.