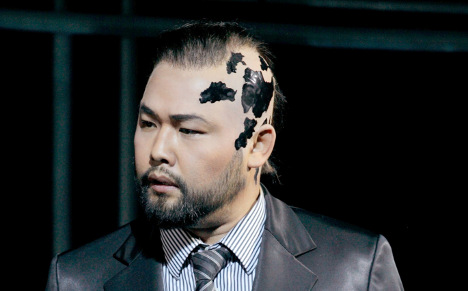 The upcoming young German director, 31-year-old Jan Philipp Gloger, and his team were met with the boos and whistles when they took their curtain call at the end of the two-and-a-quarter-hour evening, attended by Germany’s political and social elite, including Chancellor Angela Merkel.

By contrast, the South Korean bass-baritone, Samuel Youn, who stepped in at four days’ notice after the original singer, Russian opera star Yevgeny Nikitin, quit in a row over a Nazi tattoo, met with enthusiastic cheers and stamping as he took his bows.

But it was perhaps German conductor, Christian Thielemann, a long-time favourite in Bayreuth, who proved to be the biggest star of the evening, with a miraculously balanced and refined reading of what is regarded as Richard Wagner’s first mature opera.

Bayreuth’s legendary Festspielhaus theatre, built to the composer’s own designs, reputedly has the best acoustics of any opera house, thanks to its unique covered orchestra pit.

But it is precisely that which makes it so tricky for conductors and only an experienced maestro such as Thielemann, who was conducting his 111th performance in Bayreuth, knows exactly how to achieve the sound he wants.

Gloger, who has so far made his name in spoken theatre and only directed two operas previously, updated the story of the ship’s captain condemned to roam the seas for eternity until he finds redemption in the love of a woman to the 21st century.

Gloger casts the Dutchman appears as a cyborg-like figure, a mega-rich businessman who can afford anything he desires in life.

He agrees to hand over his fortune to entrepreneur Daland, who owns a mail-order and logistics concern, in return for the hand of his daughter Senta.

While Gloger’s set designer Christof Hetzer created striking pictures for the Dutchman’s computerized world, the modern-day reading quickly runs out of steam after the first scene.

The “Dutchman” is the only new production of this year’s festival, the 101st edition of the annual month-long celebration of Richard Wagner.

Also on the programme is a revival of last year’s new production of “Tannhäuser” by Sebastian Baumgarten, which was vilified by critics and audiences alike for setting Wagner’s tale of a minstrel-knight in a biogas plant.

For many Wagner fans, this year’s festival will merely act as a prelude to celebrations marking the 200th anniversary of Wagner’s birth next year.