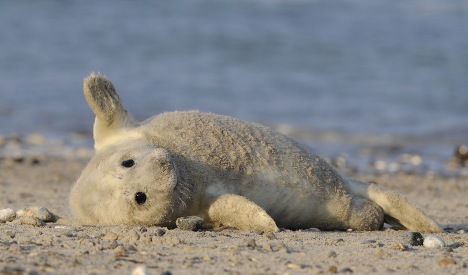 Fisherman and hunters in Schleswig Holstein have proposed the large-scale cull of seals off the coast of Wilhelmshaven, wrote the Hamburger Morgenpost on Wednesday.

“If there were 15,000 seals it would be enough to secure the population,” Lorenz Marckwardt, head of theLandesfischereiverband fishery association in Schleswig Holstein, told the paper.

Shooting seals would also in the interests of tourism and – bizarrely enough – the seals themselves, argued head of the Schleswig Holstein Hunting Association Andreas Schober.

The smaller the seal population, said the hunter, the lower the risk of disease spreading among them – and of course, epidemics can be disturbing for tourists, he added.

“A load of corpses on the beach is hardly a nice view for the tourists. It doesn’t create a good image,” he told the paper.

Epidemics in 1988 and 2002 drastically reduced the seal populations in German coastal areas, but they have bounced back due to the introduction of protected areas in Lower Saxony, Schleswig-Holstein, Hamburg and Denmark.

Local conservationists and politicians were baffled by the suggestion.

Jens Enemark, head of the Wilhelmshaven-based Wadden Sea Secretariat rejected the idea of killing seals in order to prevent their death as absurd, wrote the paper.

“We’re happy that the population has developed so well. If there was an epidemic, that would be a natural occurrence,” he said.

Schleswig Holstein Environment Minister Rober Habeck of the Green party seemed equally perplexed by the idea that a population of 15,000 would be enough. “There is no factual biological justification for it. Hunting seals would be politically wrong and legally impossible,” told the paper.

The Wadden Sea Secretariat counted over 24,000 seals in the whole of the Wadden Sea in 2011, but the paper suggested the actual number was almost a third more than that – up to 31,000. The seals eat almost eight kilos of fish a day and swim out up to one hundred kilometres into the sea to feed.

Hunting lobbyist Schober is even considering marketing seal meat in the same way as venison or wild boar, which he admitted might be difficult in Germany.

“But in Scandinavia it’s a different story,” he said.