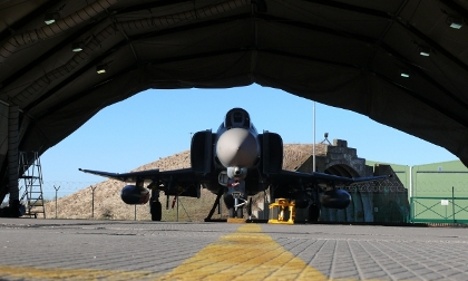 “Air traffic control lost radio contact with the plane at 8:41 am, and activated a request for a sight identification of the plane,” André Hesse, Luftwaffe spokesman told The Local.

The Tuifly Nordic flight from Gothenburg in Sweden, to Palma de Majorca was over Bremen when radio contact was lost.

Hesse said Luftwaffe planes had to react within quarter of an hour to any such request as part of the Nato integrated air defence system covering Europe.

“We had two Phantom F4F jets in the air anyway on a training flight,” said Hesse.

“They were taken off their route and redirected to the plane to carry out a sight identification. This involves getting close enough to identify the plane – and to take a look in the cockpit to see whether anything unusual is happening. They have to come relatively close to do this.”

He said they would be close enough for the commercial pilots to give a thumbs-up to signal to show everything was ok.

“The Phantoms escorted the plane from 8:45 until 9:00, when radio contact with air traffic control was re-established,” said Hesse.

Alexander Huber, CEO of Tuifly Nordic, told The Local it was not uncommon for radio contact to be temporarily lost, and that an investigation would be launched to figure out what had happened in this case.

Hesse said it initially looked as if the Tuifly pilots may have muddled up the frequencies on their radio.