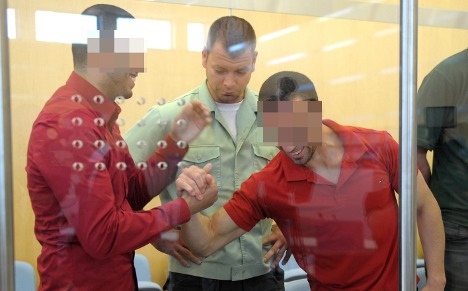 The men, aged between 21 and 32 had not yet chosen a target, the prosecutor said, but one of the accused had apparently informed himself about security measures at airports and public buildings.

They are being charged with being members of a terrorist organisation, and could face ten years in prison if convicted.

Defence lawyers for the so-called Düsseldorf cell began the trial by calling for its dismissal, saying they had not had access to all the evidence against their clients. They had not seen crucial documentation of the surveillance of the group in a flat, the lawyers said. This was dismissed by the prosecution.

Public prosecutor Michael Bruns said the four men had planned a “headline grabbing and spectacular attack” in Germany in order to spread shock and fear across the country.

He said the 31-year-old Moroccan Abdeladim El-Kebir who had studied at Bochum University, had received orders for the attack during his stay in an al Qaida training camp on the Pakistani-Afghan border.

There he also learned how to shoot, and build bombs, including detonators, the prosecution said.

On his return to Germany in May 2010, El-Kebir had contacted the other three – German-Morrocan Jamil Seddiki, 32, German-Iranian Amid Chaabi, 21, and German Halil, Simsek, 27. They worked as a group, trying to isolate an explosive from barbecue firelighters to build the bombs, the prosecutor said.

Die Welt reported the attempt would not have worked because the explosive chemical needed is not contained in German firelighters. Yet the group were unaware of this fact.

“A larger amount of explosive would have been as effective as commercially produced TNT,” said Bruns.

German authorities only became aware of the group from a tip from an informant, admitted Bruns. Hacked emails from the group convinced investigators of the seriousness of their plans. One sent by El-Kebir to a high al Qaida functionary is said to have read, “Oh our Sheikh, we will keep our promise – either victory or martyrdom.”

The trial is expected to continue until at least the end of November.