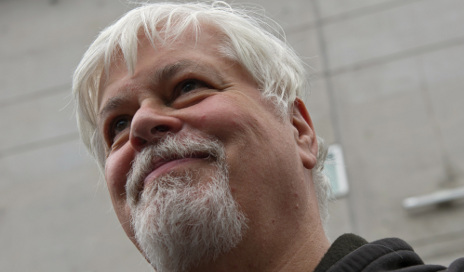 It is presumed he skipped bail and left Germany on Sunday, when he failed to report to the police within the interval required by the terms of his bail, Frankfurt’s higher regional court said on Wednesday. Watson’s lawyer informed the court he had left Germany “for an unspecified destination.”

A spokeswoman for the German federal justice ministry said it was not aware of Watson’s whereabouts, nor could it say whether he was still in the country.

“Since by fleeing, Watson has shown that he cannot justify the trust placed in him, the extradition process has been restarted,” said the court, after deciding to resume extradition proceedings against him to Costa Rica to face charges dating back to 2002.

Watson is accused by Costa Rican authorities of “putting a ship’s crew in danger” during a high-seas confrontation over the illegal practice of shark-finning – where sharks fins are harvested from living fish – in Guatemalan waters a decade ago, wrote the Süddeutsche Zeitung on Wednesday.

Those aboard the Sea Shepherd “Ocean Warrior” vessel, which was filming a movie when it came across the fin harvesters, claimed they then attempted to escort the Costa Rican ship “Ocean Warrior” back to port. The Costa Rican crew has accused the activists of attacking them with water canon in an attempt to kill them, allegations Sea Shepherd denies.

Because the incident happened on the high seas, the Costa Rican authorities were able to issue an international warrant for Paul Watson’s arrest via Interpol, wrote the paper. He is Canadian but also has US citizenship.

The 61-year-old, whom Sea Shepherd members affectionately call “the captain,” was finally arrested on May 13 at Frankfurt airport in western Germany. He was detained for a week before being told he could leave custody – on €250,000 bail and the condition that he did not leave the country.

Meanwhile, the German authorities were to consider whether he should be extradited – a move which Watson had attempted to appeal on grounds of a procedural error on the part of the Costa Ricans.

Leader of the Greens’ parliamentary party Volker Beck said at the time of Watson’s arrest that he should not be sent to Costa Rica as “it is to be feared that Paul Watson would not get a fair trial.”

Beck also said it was not unlikely that the fact that Watson was being pursued so long after the incident pointed to a political motive.

On a visit to Germany in May, Costa Rican President Laura Chinchilla insisted Watson would have a fair trial if extradited to the Central American country.

In an interview with news wire AFP after he was arrested, the activist vowed that his campaign would continue even if he were tried and jailed.

“They hope that by getting me out of the way, they’ll shut down our operations. They won’t,” Watson said.

“This is not about me. It is about our oceans and the ever-escalating threat of diminishment of the diversity of life in our seas. It is about the sharks, the whales, the seals, the sea turtles and the fish,” he said.