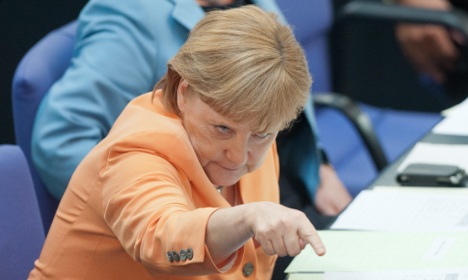 The new opinion poll is just the latest to suggest that next year’s federal election will result in a “grand coalition” between the two main parties.

The survey, conducted by polling firm Forsa, said that if the election were held tomorrow, the current ruling coalition of Merkel’s Christian Democrats (CDU) and the Free Democrats (FDP) would not be able to form a government, Stern weekly magazine reported on Wednesday.

But then neither would the opposition – combining the centre-left Social Democrats (SPD) and ecologist Greens. The CDU and FDP combined would gain 40 percent of the vote, just ahead of the SPD and Greens on 39 percent.

The FDP would not even make it into parliament, as it continues to trail in the polls with just four percent of the vote – not enough to clear the five percent parliamentary representation hurdle.

And yet Merkel’s CDU, despite their unconvincing lead over the opposition, have a distinct advantage with voters: Merkel herself.

If voters were allowed to elect the Chancellor directly in a head-to-head battle between two rivals, the poll suggests none of the three potential SPD candidates for the top job would come close to beating her.

If facing Merkel alone for the Chancellorship, head of the SPD parliamentary party Frank-Walter Steinmeier would get 27 percent of the vote against 49 percent for Merkel. His colleague, ex-finance minister Peer Steinbück would score 26 percent compared to Merkel’s 52 percent and SDP party leader Sigmar Gabriel would get just 17 percent against a corresponding vote for Merkel of 59 percent.

“Approximately one in two voters is happy with Merkel and her work. There is no mood for change. It will be difficult for any of the SPD Chancellor candidates,” Manfred Güllner, head of the Forsa polling institute told the magazine.