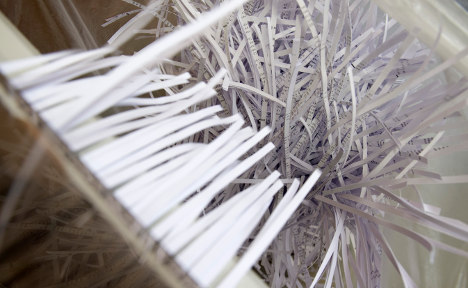 Hans-Peter Uhl, domestic policy spokesman for the Christian Social Union (CSU), said the destruction of files by the Verfassungsschutz had probably made it impossible to launch another attempt to ban the NPD on constitutional grounds.

“The material that the Verfassungsschutz would now present to the Constitutional Court in an NPD ban is of course more vulnerable to attack than it used to be,” Uhl told Monday’s Berliner Zeitung newspaper.

He said that the NPD’s lawyers would use the numerous recent scandals about the secret service’s handling of the investigation into far-right terrorism to undermine the authorities’ credibility. Uhl said this would be difficult to dispute.

“It makes the challenge even more unlikely than it was already,” he added. “It’s virtually a dead duck. No-one is seriously proposing it at the moment anyway.”

The chaos currently surrounding the federal domestic intelligence agency claimed the career of another senior figure on Monday – Vice-President Alexander Eisvogel resigned as a result of the file-shredding scandal, news magazine Focus reported.

Eisvogel had been considered a possible successor to Heinz Fromm, the agency president who resigned earlier this month. He was responsible for supplying files to the parliamentary investigative committee on the secret service failings.

The committee is currently trying to find out why the secret service failed to prevent the National Socialist Underground, a trio of neo-Nazi terrorists, from going on a decade-long killing spree.

Now anonymous parliamentary sources have suggested Eisvogel was involved in destroying the files. They added that this would explain why he was overlooked for promotion to the head of the agency in favour of designated new chief Hans-Georg Maaßen.

Disciplinary investigations are currently under way into three secret agents accused of destroying files on the neo-Nazi informants in the state of Thuringia.

It also emerged last week that telephone surveillance files on extremists who had contact with the NSU were destroyed in November and December last year and April and May this year – at the behest of the interior ministry.

The parliamentary committee has called on the authorities to stop destroying files immediately. The interior ministry defended the file-shredding as “a routine measure,” since telephone surveillance files come under special privacy restrictions.