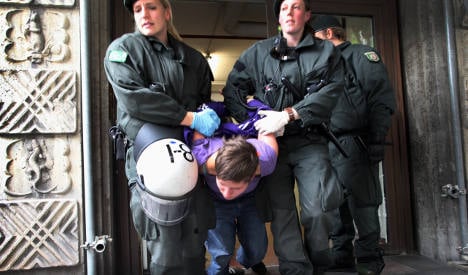 Over 30 activists marched into the consulate building on Martin Luther Platz in Düsseldorf on Friday afternoon. Ten of them then barricaded themselves inside a room on the first floor, while a further 25 made a noisy protest outside, announcing their intention to stay overnight in the building, the Bild daily reported on Sunday.

At 12:09 the embassy staff put in an emergency call to the police. “The French embassy filed an official complaint to the police due to unlawful entry,” embassy spokeswoman Susanna Heusgen told the paper.

Around 100 police officers then surrounded the building and at 3pm the occupying activists were cleared out and arrested.

At the same time elsewhere in the city, 30 to 40 people broke into the local headquarters of the Green Party. “One of them posed as a postal worker,” an employee told the paper.

The Green Party employees at first attempted to persuade the occupiers to leave, but by 8pm they gave up and asked the police to intervene. Eight activists left of their own accord, but a further 35 had to be forcibly removed from the premises. They have been charged with unlawful entry.

“No Border” demonstrators have been camping out for some time in Cologne and are holding a vigil in Düsseldorf, wrote the paper.

Their demands include the abolition of compulsory residence for asylum seekers, a stop to deportations and the improvement of conditions in refugee camps.

A further protest is planned at Düsseldorf airport on Sunday.