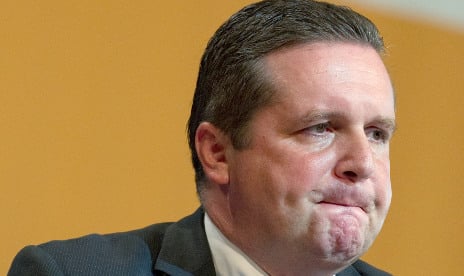 Mappus, who was absent at the Christian Democratic Union (CDU) Baden-Württemberg regional party conference on Saturday, has been accused of spending nearly a billion euros too much of taxpayer’s money.

Mappus bypassed parliament to close a €4.7 billion deal to buy 45 percent of the regional utilities group EnBW in December 2010 – three months before he lost his post in the state election.

Now his party colleagues have attempted to distance themselves from the deal – which caused a national scandal earlier this month after prosecutors began criminal investigations against Mappus and his old friend Dirk Notheis, the head of investment bank Morgan Stanley’s German operations.

Prosecutors have said the decision to use Morgan Stanley as an advisory bank for the deal could have damaged the interests of the state.

Speaking to the party conference on Saturday, the chairman of the Baden-Württemberg CDU Thomas Strobl said a recently leaked email exchange between Mappus and Notheis had “left him stunned” and had “damaged politics and the CDU.”

According to reports in the media, Notheis is thought to have pressured Mappus not to call in any competing banks, ensuring there was no confirmation of the purchase price for the EnBW shares.

There were no “justifiable reasons,” for the contract being signed for €41.50 per share rather than the €39.90 minimum being demanded by the seller, French energy firm EdF.

Strobl said the scandal had given the impression that the state’s interests had been laid in the hands of an investment banker and that Mappus had failed in asserting the “primacy of politics.”

Head of the CDU parliamentary group Peter Hauk said Mappus had acted under his own authority and contravened the “the CDU’s understanding of democracy in Baden-Württemberg.”

Strobl encouraged the party to do some soul-searching, saying that although Mappus had made “a solitary decision,” it was followed “for too long” and “too uncritically” by his party colleagues – a fact which must be recognized as a “mistake.”

However, both Strobl and Hauk said they could not judge whether the high purchase price had been justified. Hauk said he welcomed the fact that the EnBW was back in the hands of the state, adding that the party “had no reason to doubt the purchase price at the time.”

The Green Party, now in power in the state, has accused Strobl of trying to get his party off the hook, “washing the hands of the party in innocence,” according to the Baden-Württemberg Green Party co-chairs Thekla Walker and Chris Kühn. At the time of the deal, they said, the CDU had not only “allowed” Mappus to act but also “applauded” his actions.