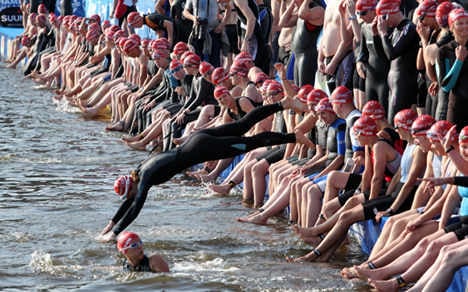 I Have Seen This Happen In Other People’s Lives, Now It’s Happening In Mine

Berlin painter Lars Theuerkauff examines the banality of the material objects that connect us. Inspired by a mobile phone video from the web where a man in Africa is beaten with the same model of Adidas shoe the artist wore, Theuerkauff mixes mediums to accentuate the common thread – the three stripes – that bind everything from atrocities, poverty, politics and sports to the rest of the world. The artist hopes to elicit questions from audience members such as “what do these images have to do with me?”.

In honour of the Summer Olympics this year, the Allied Museum takes an in-depth look a lesser-known side of Berlin’s Cold War days – its relationship to sports. From the ban on all German sports by the Allies in 1945 to the founding of multiple sports leagues years later, this co-operation with the Berlin Museum of Sports examines the role of organized sporting activities in forging ties not only amongst members of the Allied Forces, but also between military personnel and Berliners themselves.

In a world without the North, the South would operate very differently: the premise guides this year’s Wassermusik Festival, a 21-day musical interpretation of a cultural theme. With a focus on Africa and South America, 2012’s line-up looks to capture the spirit of a southern world free of colonialism with a series of concerts at Berlin’s Haus der Kulturen der Welt along the river Spree. From Colombia to Cuba, West Africa over to the continent’s east end featuring Arabic and Indian influences, this musical journey is sure to enlighten as well as delight.

Seven evenings in late July and August 2012 mark the 11th installment of Museum Ludwig’s Filmbar – a rooftop-terrance cinematic experience featuring a specially-curated selection of films against the backdrop of the entrancing Cologne Cathedral. This year’s theme In the Heat of the Night highlights film genres from horror to whodunits. From classics to interesting foreign productions, this enchanting series of cinematic achievements pays homage to the darker side of life.

Enjoy an exciting selection of films from dusk on against the backdrop of the Düsseldorf’s charming section of the Rhein. From the latest blockbusters and Academy-Award winners to classics such as Dirty Dancing and even a showing of Rocky Horror Picture Show, this outdoor installment of summer cinema even includes a full-service business option complete with dinner, drinks and director’s chairs.

Thousands of LGBT supporters will take to the streets for the 20th anniversary of Frankfurt’s Christopher Street Day celebrations. One of the five largest CSD festivals in Germany, this rendition tends to have a cozy air about it, with the festival’s parade winding its merry way through the city’s old inner section between Römerberg, the Hauptwache and Konstablerwache from Saturday at noon. Of course there’s plenty of dance-partying to be had before and after, just check the programme for all the juicy details.

Musicians such as Ali Farka Touré were some of the first people to point out the uncanny similarities between North American Mississippi Blues and western African musical styles. Indeed Bassekou Kouyate and Ngoni Ba reiterate the connection between the western African Segou region of Mali and blues and jazz from the U.S. Designated “Best World Music Album of the Year” by the BBC in 2007, Kouyate’s debut album found a stage at the Royal Albert Hall for the prize ceremony.

Get a load of the best new short films in Germany: the selection (including pieces as short as one minute) spares no genre from the frightening to the funny, cheesy to the cheeky. Appearing at three different venues throughout the festival, the films are played out in the open air, including one location overlooking the 16th-century Höchst Castle in Frankfurt’s western Höchst district. Other viewing spots include the Altes Wasserschloss and the Kurfürstliches Schloss.

Price: €8 for individual showings, €20 for a festival pass

A fantastic weekend of triathlon awaits as everyone from Olympic medal winners to world champions, the brightest German youth and junior athletes, physically-challenged athletes, amateurs and complete novices convene to compete. Watch all levels of sprints, cycling and swimming wind their way through the Hanseatic city Hamburg – the perfect backdrop for this diverse series of demanding races.

One of auto racing’s most exciting events comes to Germany’s Hockenheim track this weekend, bringing thousands of spectators to cheer on their national hero Michael Schumacher and four other German contenders. With a best Hockenheim placing of 3rd, 25-year-old Sebastian Vettel is going for his second win of the season at a track mere kilometres from his hometown.

Every year in late July, Munich’s Königplatz plays host to a selection of the latest popular cinema from Germany and beyond. This year’s lineup includes The Artist, Ziemlich Beste Freunde and Marvel’s The Avengers played out against the backdrop of one of Frankfurt’s most beautiful squares. VIP events including a separate entrance, food and drink are available for advanced booking: see the website for details.