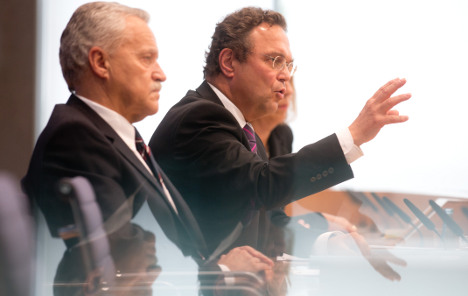 Launching the annual report compiled by the Office for the Protection of the Constitution (BfV), its president Heinz Fromm said he could not rule out the chance “that individuals could take these acts as inspiration, and act in a similar manner.”

“Great vigilance is needed here,” he warned, adding that the number of neo-Nazis prepared to use violence was on the rise, even as the number of those in formal organisations was dropping.

Fromm resigned at the start of this month due to the mistakes made within the service in connection to the attacks by the National Socialist Underground gang and has two weeks left in his post.

Important files relating to informants who were close to the NSU trio were shredded by some of his agents just as connections were being made between them and the murders.

This was “no normal mistake”, said Fromm, who led the BfV for 12 years. “The exceptional thing was that the mistake was hidden for more than half a year,” he said, adding that disciplinary proceedings were continuing against three agents.

Fromm also formally introduced his successor who will take over at the end of the month.

Hans-Georg Maaßen, 49, was approved by the cabinet on Wednesday to take over the ailing service. Until now he has been chief of staff for counter-terrorism at the interior ministry.

Interior Minister Hans-Peter Friedrich said the BfV’s failure to prevent the ten murders which the NSU is accused of carrying out along with a string of bank robberies, had been its “biggest mistake”.

He promised that a framework paper to reform the service would be put on the table by the autumn – and rejected calls from some quarters to close it down altogether. “The [service] is an indispensable early warning system,” he said.

The threat to Germany from extremism, terrorism and cyber attacks on computer systems was growing, he added.