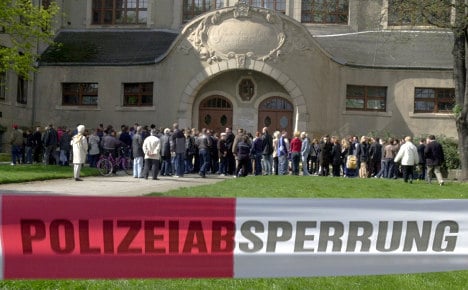 She compiled her report using data from state interior ministries which was, she said, “very sensitive and it was not easy to collect.”

Nearly half of the threats came from the western state of North Rhine-Westphalia (NRW), where in those four years, 1,279 threats were recorded.

In May 2009 alone in NRW, more than 100 threats were scrawled on chalkboards, posted on the internet or spread by word of mouth.

But Neuhäuser said other states would have similar numbers if they were similarly diligent in reporting threats. As of yet, there is no nationwide report on such threats – and Neuhäuser said she was only able to get data from 10 of Germany’s 16 states.

“If other states were to document threats as well as others, their quotes would be similarly high [as NRW],” she said.

Germany has seen several fatal attacks in schools over the last decade, the worst of which was in 2002 when 19-year-old Robert Steinhäuser attacked his former school in Erfurt. He picked out mostly teachers, killing 12 as well as two students, the school secretary and a policeman before locking himself in a cupboard and shooting himself dead.

That attack, and the one in Winnenden in 2009, when 17-year-old Tim Kretschmer killed 15 people and then himself, have often been cited as inspiration by others who make threats.