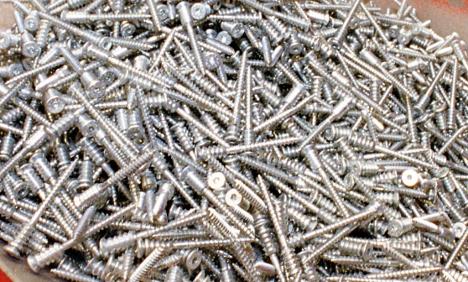 A vigilant driver called the police after noticing the man working on a roadside warning lamp late on Saturday evening. He was reportedly wearing a headlamp, and kept hiding whenever a car approached.

Officers arrived to find a man who fit the description of a screw-thief who had evaded them for months, taking the screws from road signs around the small village of Peiting.

“He had a large number of nuts and appropriate tools with him,” police chief Rudolf Fischer told the Münchner Merkur newspaper.

“He quickly admitted that he had been dismantling road signs for some time,” Fischer added.

Police later found kilos of stolen screws, nuts and eyelets in the man’s home. They believe that he was motivated by a simple mania for collection.

The 54-year-old man, who had no other convictions, was apparently psychologically disturbed and is receiving care. It is still unclear whether he can be made liable for his actions, which caused an estimated damage of €800.

“We are still missing a few road signs,” said Fischer.

Franz Multerer, local authority construction chief, greeted the news with relief. “Thank God,” he said, explaining that he was beginning to wonder how he was supposed to re-attach the signs in the future.

Multerer intends to contact the police as soon as possible to ask for the screws back. “Because they’re all mine!” he explained.