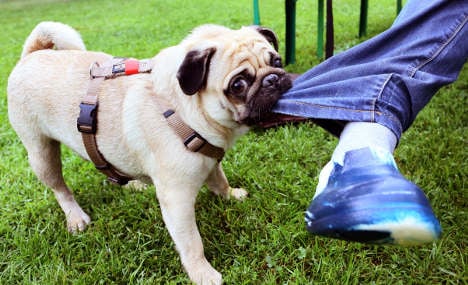 Around 100 owners took their dogs to the third “International Pug Meeting” in Berlin on Saturday, although those in charge admitted it was more of a national meet than a global one.

“For us Bavaria and North Rhine-Westphalia count as abroad,” said organiser Thomas Zupan.

The muscular lap dogs are becoming popular again in Germany, according to Inge Weßling from the German Pug Club in Cologne.

“The trend is now moving towards longer noses and longer legs,” said Zupan. The older fashion for pugs to have noses that are barely visible, and very short legs, gave rise to many animals suffering breathing problems and restricted mobility.

The eagerly awaited pug race on Saturday showed just how mobile a healthy specimen can be, with the winner Emma covering 50 metres in 7.1 seconds.

The breed – known as Mops in Germany – dates back hundreds of years and originated in China, but have long been cult in Europe. Napoleon’s first wife Josephine de Beauharnais, Queen Charlotte Mecklenburg-Strelitz and William of Orange were all said to be devotees.

“A life without a Mops is possible, but makes no sense,” the late German comic Loriot said.