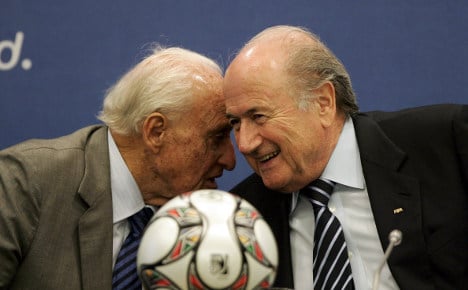 DFB chairman Wolfgang Niersbach said he was “shocked” at Blatter’s comments, adding that the DFB would distance itself from them.

Court documents released in Switzerland revealed that Brazilian Havelange, 96, who was FIFA president for 24 years, before Blatter stepped into the hotseat in 1998, pocketed at least 1.5 million Swiss francs (€1.25 million) and FIFA executive committee member Ricardo Teixeira at least 12.74 million. (€10.6 million).

The bribes, made by International Sport and Leisure (ISL), were detailed in documents made public by Switzerland’s supreme court and published by the BBC on Wednesday.

FIFA’s discredited Swiss-based marketing partner collapsed in 2001 with debts of around $300 million.

Blatter insisted on Thursday he was powerless to sanction his predecessor and added that such payments were not illegal under Swiss law at the time.

“The reaction of the president of FIFA shocked me. If FIFA people, and not the lowest among them, received money and the response is that that this was not illegal at the time then we at the DFB can only distance ourselves,” Niersbach said on the sidelines of a meeting of Bundesliga referees.

Responding to comments from Bundesliga chairman Reinhard Rauball, who wants Blatter to resign, Nirsbach said, “That is a decision for him.”

FIFA published the Swiss court’s report on its website on Wednesday and in a statement world football’s governing body emphasised that while Havelange and Teixeira were identified Blatter was not.

“The decision of the Swiss Federal Court also confirms that only two foreign officials will be named as part of the process and that…..the FIFA president is not involved in the case,” the statement stressed.

The court documents did reveal that FIFA chiefs knew that Havelange and Teixeira had been paid bribes by ISL.

It also disclosed that FIFA had agreed to pay 2.5 million Swiss francs (€2.01 million) in compensation – but only on the condition that criminal proceedings against Havelange and Teixeira were dropped.

Havelange, who remains FIFA’s honorary president, stepped down after a 48-year-spell as a member of the International Olympic Committee last December just days before the start of an ethics hearing into his links with ISL.

He was instrumental in bringing the Olympics to Rio de Janeiro and to South America for the first time when in 2009 the IOC elected the city as the 2016 host.

At the vote in Copenhagen he famously invited IOC members to his 100th birthday party on Copacabana beach in 2016 should they award the Games to Rio.